The AC Shelby Cobra is one of the most iconic sports cars of the post-war era. When it comes down to sheer automotive power and anger, there is no substitute for the Shelby Cobra. The Cobra 427 top speed was 164mph and it could leap from 0 to 60 in a heart-stopping 3.8 seconds. It was the fastest car America had ever seen at the time and left the Corvette in its dust.

The Cobra struck the public eye in the 1960s. This was the time when the notion that cars could be more than just large heavy vehicles- they could be fast and fun! And boy did the Cobra tick the fun box, provided you could tame the mighty beast!

Carroll Shelby managed to combine the two main American automotive interest groups, hot rods and sports cars, and produce one outstanding ride. In total, only around 1000 cars were ever produced.

The Vision of the Cobra

The legend of the AC Shelby Cobra began as a vision of the now late Carroll Shelby. 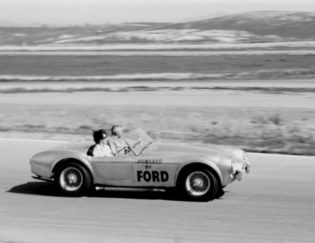 Shelby and his assistant, Joan Sherman going for a ride in the prototype Cobra shortly after it was made in 1962. (Photo: Tam McPartland)

The legendary car racers vision was to produce an affordable sports car that combined a lightweight European chassis with the torque and power of an American V8 engine in the front. It may not sound like a great feat, but nobody before Shelby had done this in such explosive success.

Even before he started professional racing, Carroll Shelby dreamed of making a sports car with his signature.

The Early Beginnings of the Shelby Cobra

The story of the AC Shelby Cobra begins in the UK.

The British car manufacturer, AC Cars Ltd of Thames Ditton in England, had been producing race-winning sports cars for decades. The AC Ace Bristol won the GT class at Sebring from 1957 until 1959.

Not long after that, their engine supplier, Bristol ended the production of their 6 cylinder engines that AC was using. AC Cars needed a replacement engine to give them that winning boost. At the same time, Ford had…