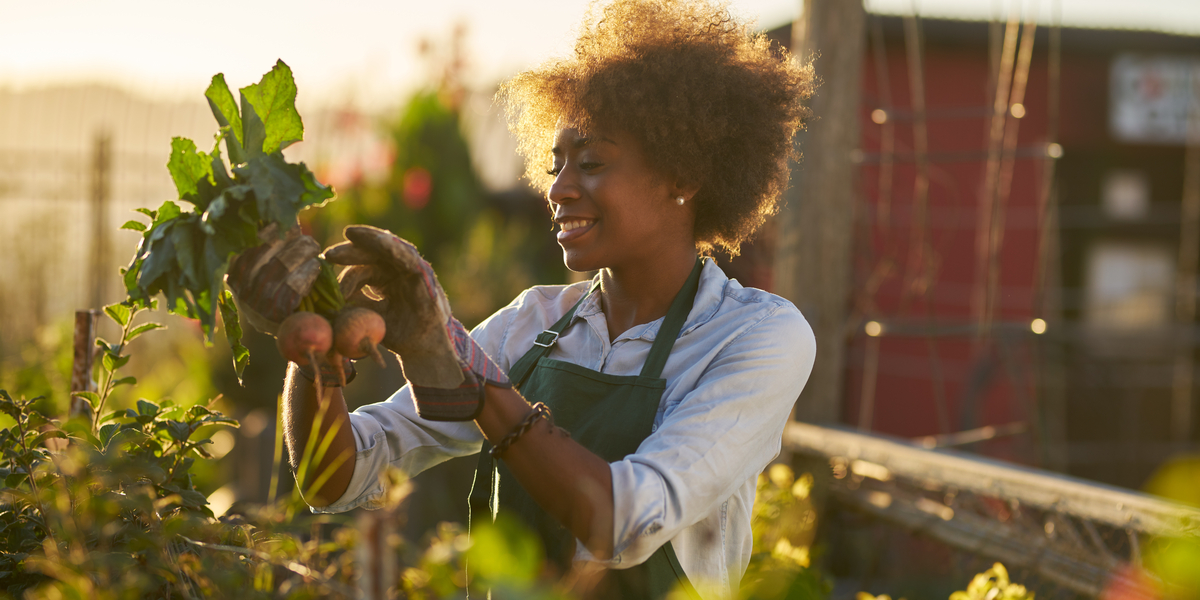 What does slowing down really look like? Over the past several months I have been asking myself this question. As a person who experiences many identities (Black, Queer, Nonbinary, transracial adoptee), moving through the current cultural climate is challenging and exhausting. Deciding who to work with and where to put my energy has become a practice of deep reflection and active listening.

I have stepped back from and cut ties with people and organizations who have not been serving me and/or actively harming me. Releasing these relationships has cleared up space for me to realize what is missing from my life and prioritize what brings me joy. I have discovered that gardening my community plot brings me great joy. Valuing what I plant means making room for things to grow. Tending a garden is careful, attentive work, and it is important to see what is taking up too many resources. Gardening gives me what I need to sustain and grow and fruit and thrive. Planting seeds, watering a plot of land and watching life sprout and grow is beautifully grounding — for too long I had gone without a solid connection to the earth. When it is time, I harvest the fruits and vegetables and herbs, careful to take only what is needed for me and my loved ones, and for the plant to survive and thrive.

I have learned that tending a garden takes a lot of work, and weeds and pests stay attacking the fruits, veggies, and herbs I have planted. Here’s the thing though: plants are resilient, they want to survive, and if I help them, if I do what is possible to help them grow and fruit and thrive, more often than not, they do.

Grind Culture Is Killing Us

Believing we are machines instead of human beings is killing us. Capitalism, white supremacy, and slavery set the conditions and grind culture is a natural result of this collision of harm. The idea that people enjoy working 130 hour work weeks, that we must produce, produce, produce to have value is the crux of the hustle. On the plantation, an enslaved person’s value was a direct result of the work that person was able to produce. If a person was unable to meet the dehumanizing expectations of the plantation owner, that person was punished. If that person’s value dipped low enough, they would be sold or murdered.

These same tactics are used by companies and by the government to keep a constant assault on people who are not the 1%. With an administration constantly rolling back and attacking basic human rights, denying access to affordable education, healthcare, and other valuable resources. While the government sets the conditions, companies and organizations are designed to uphold systems of oppression designed to keep people subjugated. Companies provide “perks” for employees, which do not value their actual worth, but pander to their capitalist wired brains. Who needs time off when there is a yoga studio downstairs and a gym across the hall? Who needs higher pay when the company provides snacks and beer?

People who are overworked, under resourced, and denied access to true information are easy to control. People who are overwhelmed do not question, do not push back, do not revolt. These are uncomfortable truths, and it is becoming clear now more than ever, that we need to collectively sustain our gaze. The time has come to do things differently and on a wider scale. People in Black and Brown and Indigenous communities are no strangers to transformation — living in oppressive conditions has created an ability to think critically to find tangible solutions to make effective, sustainable change. Knowledge is out there ready to be consumed and incorporated into our culture and society.

The catch is, we must be willing to look at our history, and ourselves in order to uproot the systems which live in our past, and in ourselves.

Throughout this pandemic we are seeing the effects of grind culture on our society. People are continuing to attribute their worth to their productivity. A direct descendant of slavery and capitalism, the tactics used to enforce grind culture on this country’s workforce are close kin to those used by white plantation owners on enslaved African and Black people.

This quote from the New York Times shows the juxtaposition of two Americas, that of the 1%, and of the rest of us.“What made the cotton economy boom in the United States, and not in all the other far-flung parts of the world with climates and soil suitable to the crop, was our nation’s unflinching willingness to use violence on nonwhite people and to exert its will on seemingly endless supplies of land and labor. Given the choice between modernity and barbarism, prosperity and poverty, lawfulness and cruelty, democracy and totalitarianism, America chose all of the above.”

Grind culture is a tool used to sustain and bolster the wealth and livelihoods of the 1%. Enslaved African and Black people on plantations were worked past exhaustion, they had their humanity and dignity and privacy stripped from them. Capitalism is the reason Africans were enslaved by white people in the first place. After they slaughtered hundreds of millions of indigenous people when the English invaded and colonized this country. Accessible resources were limited and of poor quality, and education was forbidden. Bodies, religions, and marriages were policed. Enslaved Africans and Black people were pitted against one another, with some people put in positions of power wielding force over their kin and community.

So How Do We Cultivate A Culture Of Change?

The things we need to be whole cannot thrive inside of capitalism. People are waking up to the fact that we are more than the systems living inside and around us. With the swell of grind culture looming everywhere we look, an awareness is rising that humanity has the agency to choose a different path. Systems which are rooted deep inside of us can be removed. The possibility to thrive outside of capitalism, white supremacy, and facism is within our collective control.

The Movement for Black Lives has called for the defunding of police. Across the nation Black Lives Matter activists are working to answer the call. Support for the demand has been powerful and has resulted in the Minneapolis city council unanimously voting to move toward defunding and dismantling their police department. Despite the excitement many are wondering, what comes next? Miriame Kaba, an active organizer and educator for transformative justice and prison abolition has said, “We’re not going to abolish the police, if we don’t abolish capitalism, by the way! It ain’t going to happen.”

After 9/11, Alice Walker said we as a country needed to take a pause, to be with the moment, and grieve together before moving forward. The Nap Bishop, Trisha Hersey ministers that we need rest as reparations. Her organization, The Nap Ministry, spreads the message that to dismantle grind culture we need to rest. The way forward is not to feed systems of oppression, but to dismantle them and feed ourselves. Transformation is possible, it can begin with digging our hands in the earth, it can begin with a decision to rest.

The beautiful thing is that there is no one right or wrong way to push back against grind culture. Radical rest can be molded to fit any body. It’s deciding not to click into an article we know will upset us, or choosing not to respond to a text message or email right away because maybe it doesn’t need a response until tomorrow. Embodying rest means slowing down and being present. For some that may look as mild as an afternoon nap welcomed in by a good book, for others it may look like linking up with other Black and brown folks in nature, or starting the day by writing in a journal. The point is to allow for and create space to feel, connect, and be.

Healing Is Tending The Garden

Healing is pulling up the roots and things, which are not benefitting the health of the garden, and instead are eating up necessary resources, crowding and soaking up sunlight and water and starving what was intentionally carefully planted. Society will plant weeds in our garden. Weeds that flower and seed and leave no space for intention or thriving. Let’s pull up the roots.