Hurtling at Full Speed Toward the Present

If there is one thing I can recommend, it is the simple pleasure of screaming in your car.

I discovered this pleasure on a summer day in 2014, somewhere on I-80 between Sacramento and Yosemite. Despite my environmentalist disdain for cars, I enjoy driving. I like the contradictions: that my body is moving 80 miles an hour and yet totally still. That I am surrounded by dozens of fellow travelers and yet totally alone.

On that day I was, as I often am, skating on the edge of a panic attack. I don’t remember why, if there even was a reason. Whenever my therapist asks where in my body I feel anxiety, I think of a parasitology course I took in college. The textbook described a parasitic mollusk that attaches to the underside of crabs. The parasite grows long, thin arms that penetrate the host’s underbelly and extend deep into its legs and claws and brain, controlling the nerves themselves until the crab is a brain-dead husk that obsessively cleans the parasite, even as the rest of its body deteriorates.

I usually tell the therapist I feel tightness in my chest.

Screams are often ripped from us, either through fear or fervor, but rarely does one think, soberly and with intention, “I would like to indulge in a scream,” and then do it. This reticence is a mistake. There are healthier ways of coping — exercise, journaling, meditation — but these often feel like solving a gas leak with a box fan. Far more satisfying to drop a lit match down your throat and feel the tension evaporate all at once, lungs and throat bathed in a cleansing flambé.

Screaming is, however, venue-limited. Pillows are useful in a pinch, but they deny you the pleasure of hearing yourself. On the freeway that day, I realized that the air whipping against edges of my Subaru creates a makeshift padded studio, rendering me acoustically isolated. I can scream at full volume mere meters from other drivers, completely unnoticed.

It’s possible that I’m wrong, and other drivers have heard me. If so, they’ve been kind enough not to stare.

“The year 2010 still sounds far off, almost unreachably far off, as though it were on the other side of a great body of water. If someone says to me that a very bad thing will happen in 2010, I may feign concern but subconsciously I file it away.”

Bill McKibben’s words in The End of Nature, one of the first books to seriously consider the long-term effects of climate change, read 30 years later as charmingly dated and worryingly relevant. A very bad thing did not happen in 2010, but it has been happening, slowly, during the thirty years since the book’s publication. More than half of all industrial carbon dioxide emissions have occurred after 1988, the year climate change became widely known and discussed in the scientific community. If high-consumption countries had started reducing emissions that year, they could have done so at a relatively leisurely pace.

You can track three decades of government inaction through the mounting exasperation in the epilogues of climate change books: Everything will be okay if we start now. If we start now. If we start right…. now. In 2020, that’s probably not true, depending on your definition of “we” and “okay.” Even in the most optimistic predictions of emission reduction, the carbon humans have already emitted will continue to impact the climate for decades, if not centuries, to come.

Today, the year 2050 is commonly used a marker for the mid-term effects of climate change. If current trends continue, warming will have caused unimaginable human suffering and the extinction of thousands of species.

A great body of water stands between me and 2050. I try to force my vague sense of dread into concreteness: if I got a mortgage now, I’d still be paying it off. A timber pine planted today will be just ready for harvest.

My screaming epiphany occurred during the first summer I worked outdoors, gathering data for ecologists. I worked similar jobs for the next six years, driving all over California: Sacramento to Arcata, Oakland to Fresno, Yuba City to Martinez. I found climate change in every landscape, in every season: Suspiciously fog-free coastlines, bone-dry riverbeds, almond trees blooming months ahead of schedule. A rouge April heatwave leaving my sweaty thighs stuck to the seat.

I still have the same car I did then, an old Subaru Outback with a leaky head gasket and a busted A/C. After half an hour on the freeway the catalytic converter will blink out, leaving the engine trailing smog and reeking of sulfur. I fret over my tailpipe emissions, but it’s a repair I can’t afford. Fretting is cheaper.

The only time I don’t smell sulfur is when I smell smoke, which is at least a week out of every year. A major fire, even one hundreds of miles away, can grey out the horizon so completely it seems like reality extends only fifty feet in any direction.

Last fall, the sky was still blue when Pacific Gas & Electric announced it would preemptively shut off grids across California. Unseasonably strong October winds were whipping through power lines, begging sparks to land on the hot, dry grass below. The risk, the company said, was too great.

I was driving through downtown Santa Cruz when the outages hit. I’d been warned repeatedly, but I still froze in momentary confusion as lit storefronts flickered off. At intersections, robbed of stoplights and streetlights, cars inched forward, each making its careful way in the dark.

In a few months the blackouts will likely return. A few years, and they’ll become an accepted part of our annual rhythm. PG&E says it will be ten years until they’re able to adapt the grid to our new, fire-hungry climate. I will be 36 years old.

I don’t drive much anymore.

A month ago, moving the last batch of clothes out of my old house, I took a left turn too quickly and busted a tire against the curb. My car is all-wheel-drive, meaning I should replace all four tires. Instead I limp by on a spare, ignoring the pained creaks of the misaligned suspension system. Mostly, I don’t drive.

Instead I walk. Being outside helps my breath find its proper pace, a process my therapist calls co-regulating with nature. The walk is supposed to help me maintain a sense of normalcy, though since the onset of the pandemic, even my walking habits have changed. I cross the street to give a wide berth to chalk-drawing children and fellow pedestrians. I allow wandering cats to brush against my shins but not my hands. When I intercept a friend on a run, I offer a tight smile, suppressing the urge to wrap my arms around his sweaty shoulders.

Passing a low-hanging branch of a loquat tree, I consider abstaining, then impulsively grab a fistful of fruit. I work out the large, hard seeds and drop them into my pocket before savoring the juicy mass of flesh. In early summer the Sacramento streets are warm, the loquats pleasantly sour. In a few weeks, the fruit will grow honey-sweet and wrinkled. The pavement will get hot enough to melt cheap sneakers. Each summer, the heat finds new records to break.

As the pandemic throttles the global economy, carbon emissions for 2020 are on track to decrease by eight percent, the most precipitous drop in history. If emissions decreased by that amount every year this decade, we could prevent the worst effects of climate change. That’s not a scenario most climate scientists anticipate. In all likelihood the economy will rebound, and carbon emissions with it. The pandemic could be, as author Arundhati Roy has written, a “portal,” a chance to remake our world and “rethink the doomsday machine we have built for ourselves.” It could also be a momentary pause before the gears realign and the machine resumes its work.

I use to believe that mental illness would prepare me for a world drastically altered by climate change. It was a seductive idea: all my life, before I worried about or even knew about climate change, I felt a vague sense of impending doom. That my catastrophic daydreams have some empirical backing, I thought, was a lucky coincidence. My nervous system had spent years anticipating disaster. When the wheels came off, I thought, I’d be ready.

Three months of living through a pandemic have punctured my confidence in this theory. Anticipation of suffering, it turns out, does not prepare you for it. For all that has changed, I feel much the same: I startle at loud noises, I twitch in my sleep. My worry helps no one.

Walking doesn’t help anyone either, but it feels nice. Whenever I can, I walk to a little stretch of the American River about a mile from my house in Sacramento, scrambling through cottonwood groves and patches of mugwort until I find a length of shore free of stereos and sunbathers. After a record drought year, the river is so low that anyone trying to launch themselves off the rope swings would break an ankle on the bare riverbed. I can walk a good thirty feet before the water reaches my shoulders, water so warm that my body slips in with ease.

As I push my feet off the sand and begin to float, a sluggish current tugs my toes backward, aligning my body with the river. A moment later I let my neck relax and my face finds the surface of the water. My head is ear-deep, so that one moment I barking dogs and shrieking kids, the next only the padded silence of submersion. In the moments between scissor-kicks, I feel my body slowly drifting seaward.

I turn my head for a deep breath and dive, emptying my lungs into the water. The scream, when I hear it, seems far away. I can hardly tell it’s mine. 🌋 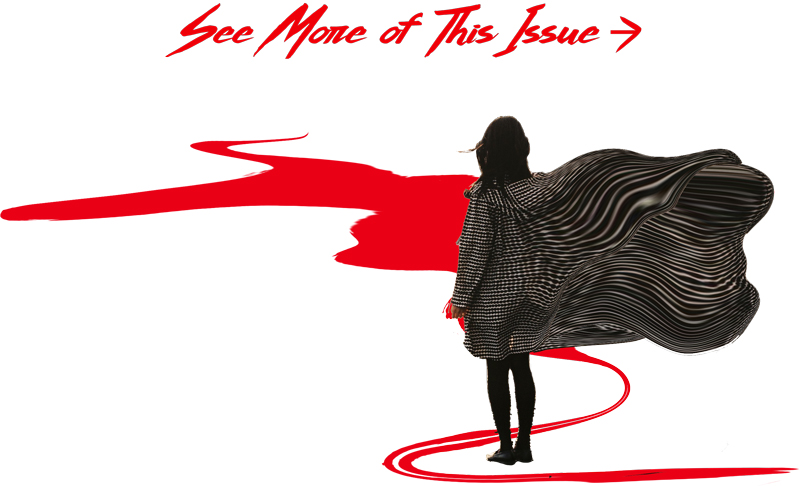 Blood on the Dance Floor: “Killing Eve” Season Three’s Last Tango Is Sexy as Ever

Buffalo teen gets car and scholarship after cleaning up after protest