GOWANDA — Former state Sen, Catharine Young attended the unveiling of the new helicopter pad and rescue truck in Gowanda, and was surprised to find out they dedicated them to her.

In 2009, Gowanda endured a 100-year flood, which inspired the pursuit of the new rescue truck and helipad. The process of attaining the new vehicle and pad was long and difficult, but was made easier by the help of the members of the department and elected officials.

“The commitment of our members has always been strong, but the commitment of our elected officials, whether local or state, is so important because they provide the tools and equipment that we need,” said fire chief Steven Raiport. “That helps us to keep our community safe and without their support, it would be very difficult to purchase equipment on our own.”

The event housed under 50 people at the Gowanda Volunteer Fire Company. All seats were properly distanced and masks were worn by those standing. Many officials spoke to the success of gaining the equipment, including Young, Gowanda Mayor David Smith, county legislator Andrew Burr, deputy Mayor Carol Sheibley and disaster coordinator Nick Crassi.

The Gowanda Fire Department is responsible not only for the village, but for the towns of Collins, Persia and Perrysburg. Zoar Valley is also a challenge in itself, since there are lots of calls that come from the gorge and how difficult the terrain is to navigate. 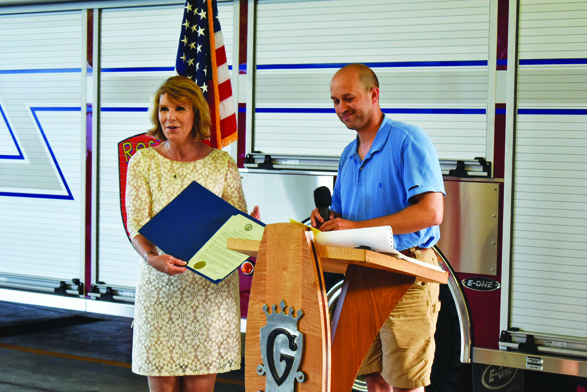 “When there’s an emergency, we’re all there,” Raiport said. “With our new truck, it will allow us to continue to operate in an efficient manner when we are called upon.”

The department gifted a plant to Young and Sheibley, a symbol of thanks from the department.

Utah activist who allegedly rioted at U.S. Capitol has been arrested

driver escapes without serious injuries after veering off highway