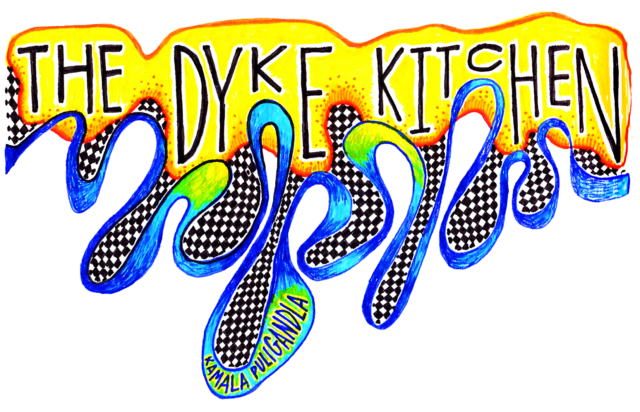 The Dyke Kitchen is a bi-weekly series about how queerness, identity, culture and love are expressed through food and cooking.

There are few foods that bring me comfort than instant noodles. I really love them. For people who love boxed macaroni and cheese, I think it ticks off similar satisfaction points: the soupy richness, the chew, the warmth, the reminder of childhood. Plus, it’s a huge winner in my book that instant noodles always come with at least one flavor packet, which means that even if you bring zero creativity to them, they have a lot of taste. I do tend to want to bring creativity to them, as you might not be surprised to learn. So I think of a pack of instant noodles as a very strong foundation for possibility.

There have been moments in my life when food snobs who are not Asian or aren’t familiar with the wide variety of instant noodles out there in the world, are surprised to learn that I don’t see it as some kind of culinary failure to plan to have instant noodles for dinner. So before I get into my favorite ways to elaborate on, accessorize, perhaps even elevate a pack of instant noodles, it’s important to note that not all instant noodles are created equal. While I certainly am not going to turn down a well-prepared Cup-o-Noodles or Top Ramen, I’m also not generally going to buy them at the store and make them for myself.

Even though this article is from 2013, it can help introduce you to some of the possibilities. Just know that there are instant noodles for all ethnicities of Asians, and they’re all really different. Some of them are meant to be eaten in a broth, some of them are cooked, drained and sauced, some of them come with both wet and dry ingredients, some of them are sour and spicy, some of them are sweet and savory. On the whole, the instant noodles that are made to sell to Americans aren’t the best versions, so, if you can, try the imported ones at the Asian store or online. One of the highlights of my life was visiting the Cup Noodles Museum in Osaka Ikeda in Japan, and making my very own custom flavor — I got to mix curry and tomato soup bases into mine, two flavors that I’d not previously tried at home. 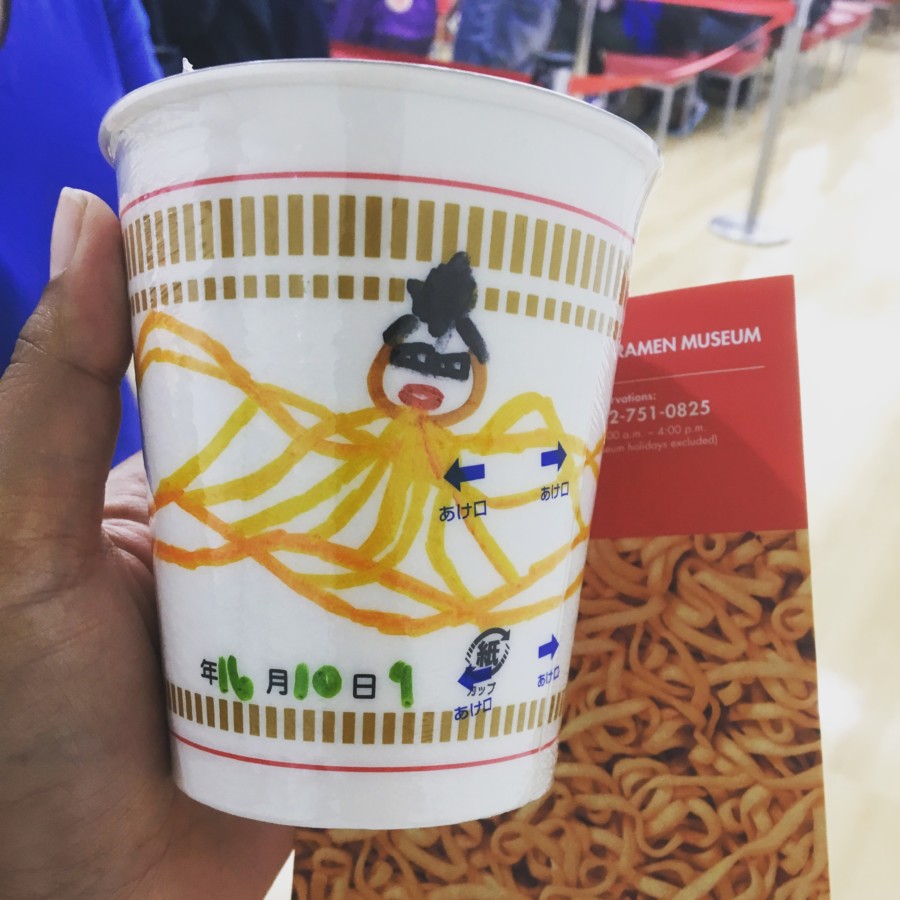 While there are many shelf-stable, fried & dried noodles that I love, I do have a semi-instant favorite: the Sun Noodle flavored ramen packs. These little guys come with two individually-wrapped fresh noodle packets and two sauce packets. My favorite sauce is the tan tan flavor, which has a thick, spicy sesame broth, followed by the shoyu flavor, a thinner soy-base, and tonkotsu, a thick, silky porky broth. The shoyu flavor is what I made on a festive evening, when I invited my favorite quarantine friend over to celebrate good creative news for the both of us! 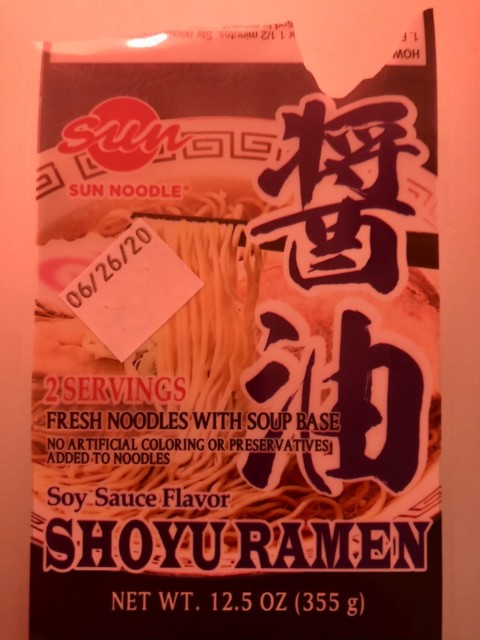 My General Approach to Topping Ramen

Add a protein: A fatty protein is my favorite, but you can also use shrimp, chicken or tofu, just think about playing the flavor of the broth off of the protein. I typically make this ahead of time, undercooked, if I’m going to be putting it into a hot broth.
Add a jiggly egg: I make these eggs by dropping them into boiling water for seven minutes, putting them in an ice bath, peeling them, and then soaking them for up to three nights in a bowl of soy sauce.
Add vegetables: You can go with the classics, like spinach, bamboo shoots, bean sprouts, etc. I typically like to go with more than one, so you can get multiple textures, and I’m not afraid to make it about the vegetables. If I make a really good braised kabocha squash, I will put that in, or I sometimes use broccoli, carrots, snap peas, corn, roasted sweet potato, or any kind of green.
Add a soup enhancer: This can be fish sauce, dashi, soy sauce, hot sauce, miso, sambal oelek, lime, honey, vinegar, garlic, bbq sauce, whatever you want to try! Sometimes you don’t need any at all and sometimes the soup is going to be flat without help, so taste your soup base. I know a lot of people like to make the noodles and the soup at once, but I like boil my water, add some to a separate bowl to make the soup, and then add my drained noodles after they’re cooked.
Add something crunchy: This might be happening in your vegetable situation, but you can also add fried garlic chips or onions, sesame seeds, pickles, caviar, furikake, Cheetos.
Try out different serving options: Your instant noodles can be a hot, one-pot dish, more of a noodle side to your add-ins with the soup as a dip, or a cold noodle salad served over veggies.

How To Make A Salmon + Eggplant Instant Noodle Dinner

For my festive evening, I went with shoyu Sun Noodle ramen, salmon, an egg, slices of roasted eggplant, sliced up kale & green onion, Sichuan chili crisp for soup spice, and furikake for crunch! 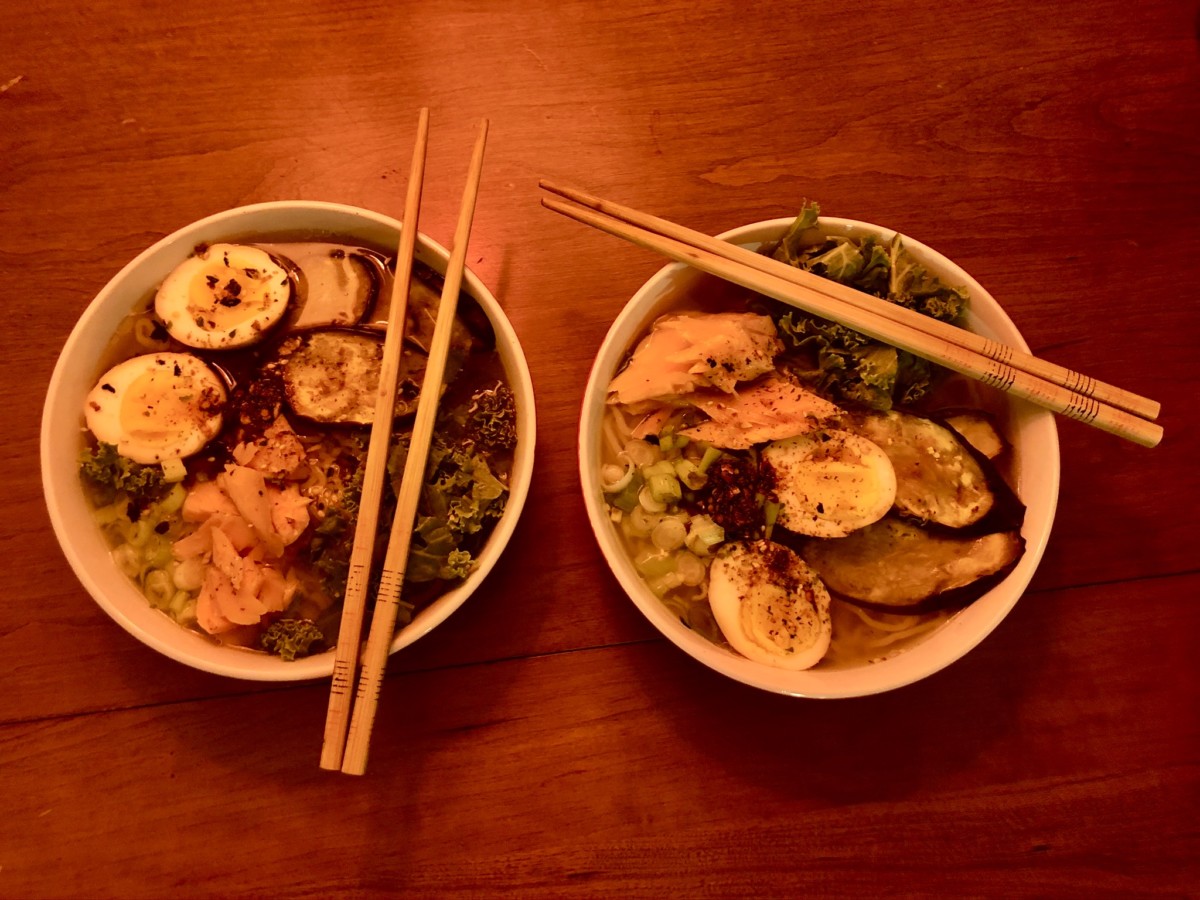 Salmon
I picked up my salmon at the Japanese store, where they have the option of getting half steaks. The benefit of this is that I don’t have to worry about too many bones or too much skin — which I love on a fillet over rice, but for a broth that already has fat in it, can become a little extra. Before I cooked them, I covered the half steaks in a marinade made from a heaping tablespoon of miso, a few glugs of soysauce, and two teaspoons of sugar. Then I cooked them in a frying pan on medium heat, a couple of minutes on each side, just to get the outside cooked — I left the insides pretty pink because I was going to put them in a hot broth.

Roasted Eggplant
I suggest using Chinese or Japanese eggplant for these, because they have a less stringy texture and fewer seeds, but any will do! Heat your oven to 425 degrees. I slice these very thinly, about a quarter inch thick, and lay them on a parchment lined baking sheet. Then I pour olive oil into a small bowl and paint the face of each slice with a brush, enough so that the color changes slightly. Eggplant is a thirsty veggie, let her drink in the oil or she will be dry! Then I sprinkle salt on each slice, and pop them in the oven for about 20 min or until I see brown edges. The eggplant is delicious hot or cold, and you could certainly add other flavors if you wanted. 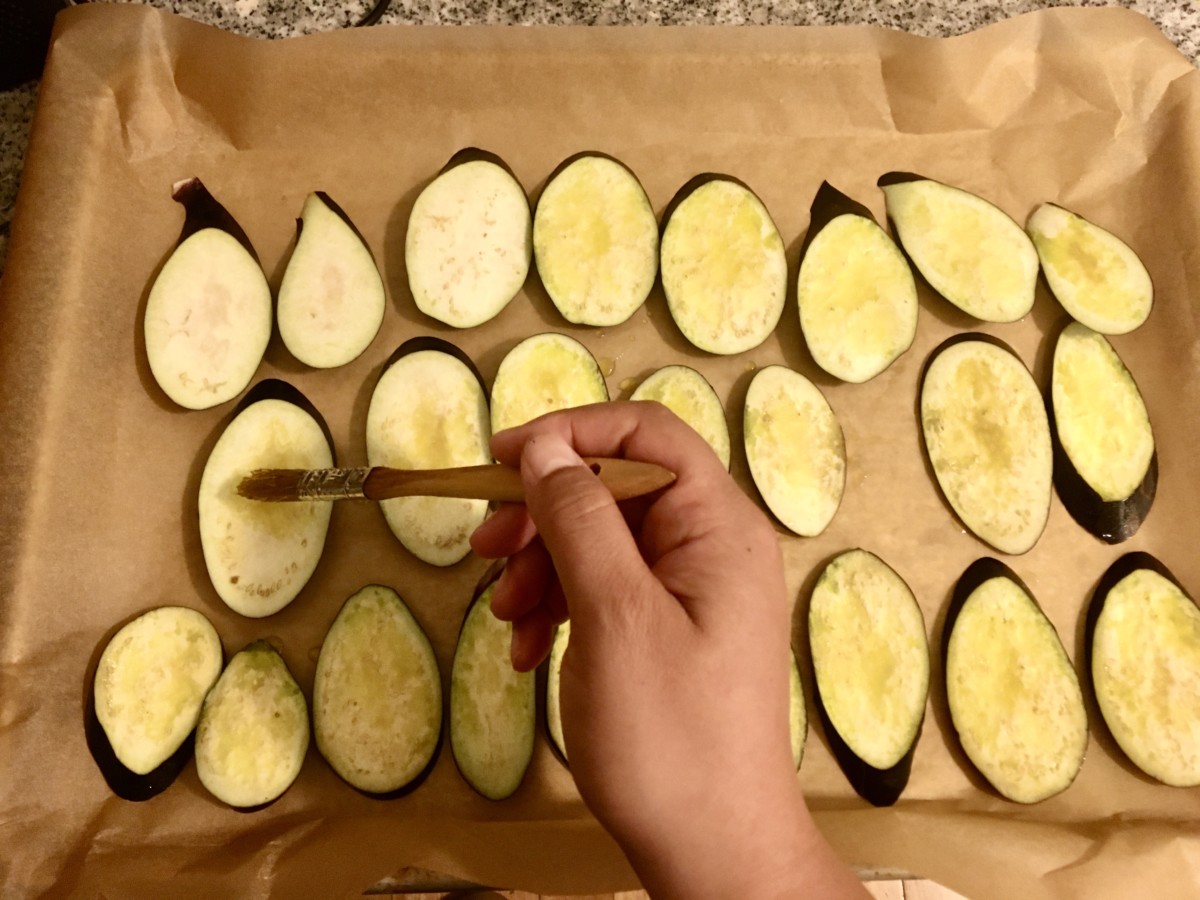 The Ramen
To begin, I put a a big pot of water on the stove. Then I emptied each sauce packet into the bowl was I was going to serve the ramen in. 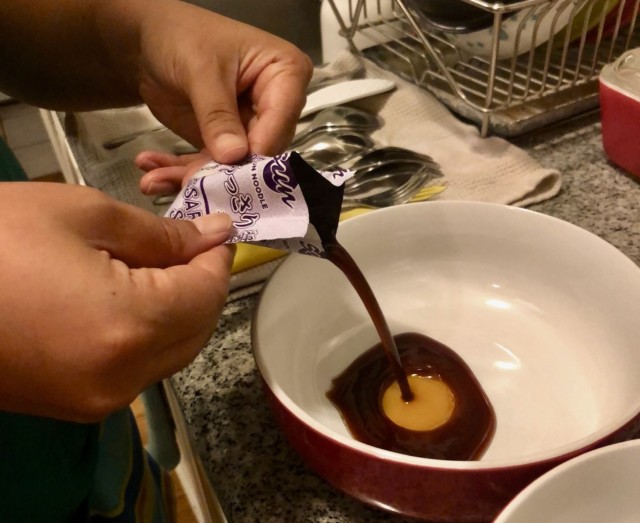 When the water came to a boil, I put both fresh noodles packs in and cooked them so they were just starting to get soft, when they were still a little hard in the middle. Since they’re going to be in hot water again, I like to leave them with some room to cook more and not get too soft. Then I drained the noodles, but over a measuring cup that let me capture about two cups of noodle water. Normally, I’d mix the broth up first, taste it and add a soup enhancer before putting the noodles in. But because the shoyu broth is pretty thin and the chili crisp doesn’t need a lot of stirring, I went ahead and placed about half of the noodles in each bowl, and then added about a cup of water to each bowl. 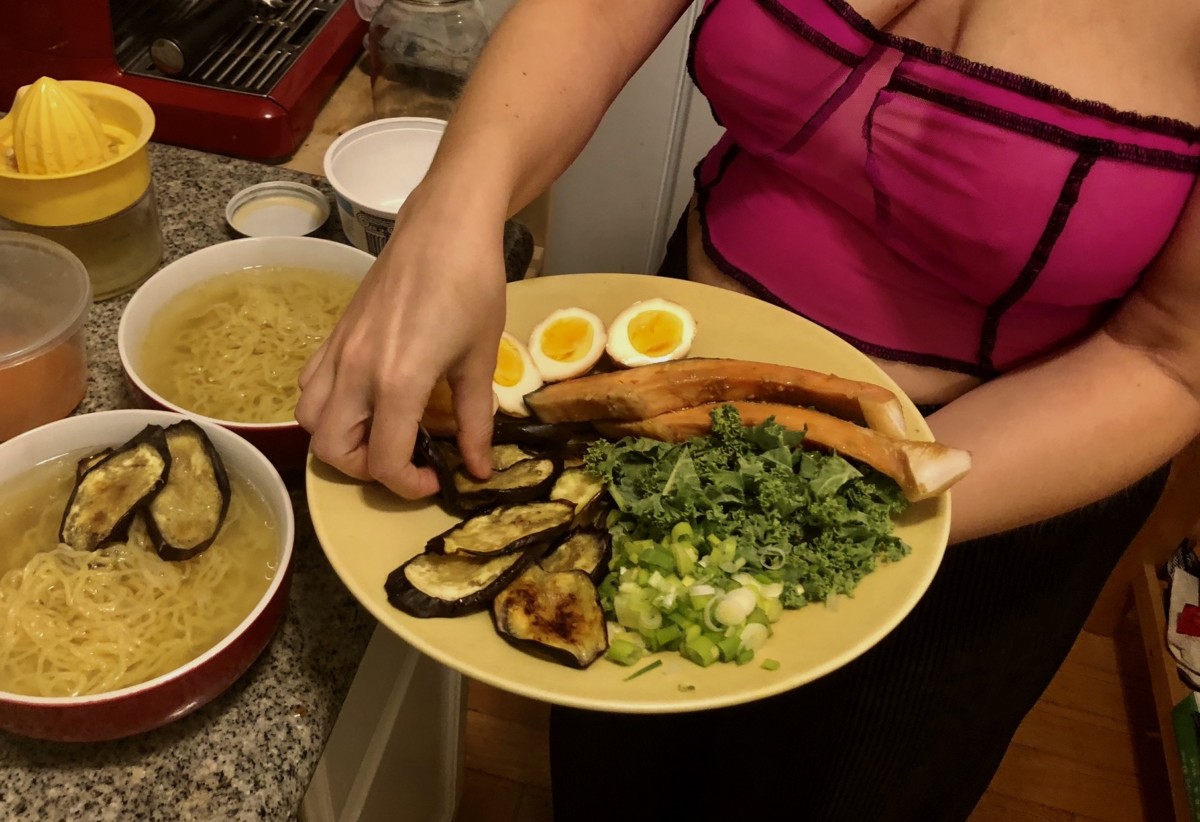 Then you just add the toppings and eat!

Tesla tells employees merit awards are on hold after Covid-19